i.e, candidates born between 02.01.1979 and 01.01.2001 (both dates included) only are eligible to apply for this post.
Other Backward Communities and SC/ST candidates are eligible for usual age relaxation

Interested and eligible candidates has to apply through the On Time Registration portal of Kerala PSC (Thulasi). Already registered candidates can see eligible posts for them in their dashboard. 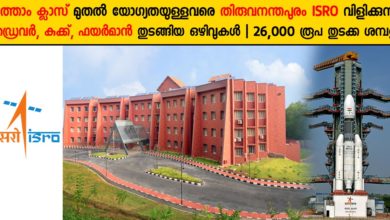